A Brief History Of The Area We Live

For those of you that are not aware our homes stand on the grounds of what was one of the largest hospitals in the Europe. 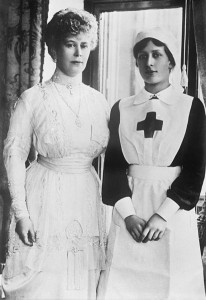 Purchased by what was then the Metropolitan Asylums Board (MAB) the 136 acre site in 1896. It was then known as the ‘Southern Hospital’.

Buildings were constructed for this by 1908 but in September of that year the MAB was also given responsibilities to looking after the care of ‘sick, convalescent or debilitated children’.

The Children’s Infirmary opened in 1909, with 1000 beds and a staff of 300. The young patients were accommodated in single storey buildings.

In 1914, following the accession of King George the Fifth and Queen Mary to the throne, and the visit of the new King & Queen to the hospital, the Queen agreed to be its patron. So in 1915 the hospital was renamed the Queen Mary’s Hospital for Children. Ward blocks or ‘cottages’, were arranged in 24 pairs of U-shaped single-storey buildings, arranged in three echelons. Each group of four cottages was accompanied by a staff house. Two blocks for surgical cases were at the south of the site. MAB also established its first Nursing

Training School at the Infirmary. The administrative block was at the north of the site, near the entrance, together with the porter’s lodge, staff accommodation, kitchens and laundry.

In 1926 it began to admit children with rheumatic fever, a common disease at the time which caused joint pains and structural heart disease.

The Hospital was extended during 1928-1930 at the cost of £207,600 (around £35m in today’s money). Two new ward blocks and four staff blocks were added, as well as a block with a kitchen and dining room. By then 350 children were being treated for rheumatic diseases, as well as 500 children with non-pulmonary tuberculosis (TB), that is, of the bones and joints (mainly affecting the spine, hip and knee), and abdominal and other organs.

During WW2 the Hospital was one of the most heavily bombed in London, perhaps due to its location and possibly as it looked quite like a military base. It was decided to evacuate the children in 1944 because of the new threats posed by the V1 flying bombs and V2 rockets.

After the Second World War the Hospital re-opened, but war damage to the buildings had reduced the numbers of beds from 1284 to 840. It joined the NHS in 1948. The introduction of Streptomycin and other antibiotics enabled better and faster treatment of Tuberculosis; the Hospital began to provide care for children with polio and cerebral palsy. 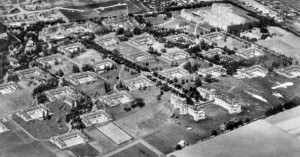 By 1959 it was caring for children with special needs. When the mentally handicapped children were transferred from the run-down Fountain Hospital, it became the first fully comprehensive children’s hospital in the UK, treating both physically and mentally sick children on one site.

By the late 1970s it was the largest children’s hospital in Europe. As most of its patients were in long-stay care, it had its own school. It even had a swimming pool, tennis courts, zoo and a miniature railway – a few pieces of the small gauge track can still be seen in the grounds today. A medical engineering unit opened on the site. It provided specific aids and instruments for physically handicapped children to enable them to become more mobile and to enjoy indoor and outdoor activities.

With improvement in medical treatments and subsequent reduction in admissions, and a change in political ethos about patients kept in long-stay hospitals, the Hospital became redundant. By 1989 it had only 132 beds for acute patients and 201 for those with mentally handicap. 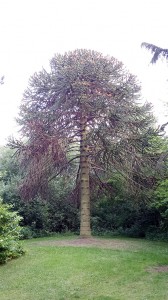 The Hospital closed in 1993 and the services were transferred to St Helier Hospital.

The chapel remains externally as it was for the last century and is now been converted into the local Busy Bees Nursery. The eastern part of the hospital site was redeveloped for residential use at the turn of the millennium in 1999-2000 and the remainder of the properties (e.g. administrative block, last remaining ward blocks) were demolished in 2011 to make way for further residential properties and the move of Stanley Park School to the site.

Some of our committee also sits on the Friends of Queen Mary’s Park committee. This committee is again designed to help protect the beautiful park we can all enjoy and if some of you have not had the chance to walk around the area we urge you to. To the rear of the development is the settlement and fort dating back to 2,800 B.C. (Bronze Age) which is a significant historical interest and registered with English Heritage.

A board explaining some further history of the area is found in front of the Araucaria araucana / monkey puzzle tree which originated from Chile. This tree in itself is of some interest as in early 2013 the International Union for Conservation of Nature (IUCN) has moved it onto the endangered list.

In 2008 before the construction phases of both Stanley Park school and the third and fourth phases of our new homes Wessex Archaeology was commissioned to undertake a programme of archaeological works.

A large number of deep storage pits were recorded, many of which had been infilled rapidly, and incorporating placed deposits. Animal burials were excavated from within the pits, many of which were deliberately deposited. Three human neonate burials were also placed within such pits. Multiple animal burials: two dogs, one horse, and one cow !

One pit in particular contained very large numbers of animals including the remains of over 25 individual sheep/goat carcasses deposited as a single layer, with additional complete skeletons of dogs, chickens and a raven.

The burial of animals in pits is known to have been commonplace in Iron Age Britain and forms part of a tradition of making offerings to the Gods of the underworld. 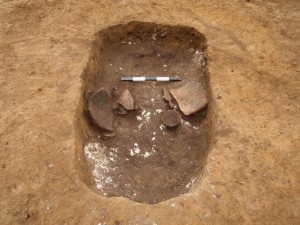 These pits were probably originally dug to store grain through the Winter before being sown in the Spring. When the pits were no longer required it is believed that the farmers buried valuable things in them and it seems likely that these animals were probably sacrificed.

As well as these more recent history finds further Bronze Age remains have been found. Small gullies, perhaps as field boundaries, and what may be droveways for cattle may be associated with original fort.

A small number of earlier prehistoric features were also identified, comprising a Late Bronze Age/Early Iron Age trackway, some pits and postholes distributed across the excavation area. These features can be interpreted as relating to peripheral activities associated with a large Late Bronze Age ring work, which lies 60m to the south of the excavation area and was likely to be the focus of settlement during this earlier phase.

A fuller report is available from the London Archaeologist – Vol 10, No.1, Summer 2002 which a copy can be ordered from http://www.londonarchaeologist.org.uk/issues.html#sm2002